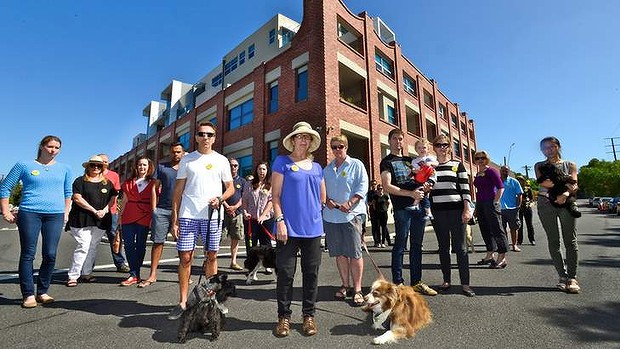 The owners of dozens of new apartments in a converted warehouse in Kensington have implored the Napthine government to buy them out because their homes will be just 14 metres from an elevated road forming part of the east-west link.

Recently released technical drawings for the $6-$8 billion project indicate the apartment building will be substantially overshadowed by a four-lane viaduct. It is anticipated the viaduct will eventually carry 60,000 vehicles a day, thousands of them heavy vehicles.

Apartment owners, who paid between $600,000 and $800,000 for their properties before plans for the east-west link were announced, say they face huge losses in equity and reduced quality of life from living in the shadow of a busy tollway.

Residents of a Bent st apartment block who want the Government to buy them out.

The project boundary for the east-west link runs along the footpath outside the Kensington Warehouse Apartments on Bent Street but does not touch the property.

A similar situation occurred last year regarding the EVO apartments in Parkville, in which the state government agreed to buy every property in the building because a small section of communal land will be acquired for the road.

The residents of the Kensington building have argued that their own situation is equally dire and deserving of compensation.

In a letter to Premier Denis Napthine and other senior government ministers, dated December 12, they requested that the government either purchase their homes or compensate them for lost value.

”We purchased these apartments in good faith, in an inner-city suburb that was designated for urban renewal. Now we are faced with living 14 metres from a new four-lane viaduct ferrying noisy, polluting B-double trucks and other traffic to and from the Melbourne port,” the letter states. ”Should the government offer to purchase 18 Bent Street, it is very likely that all owners would accept.”

The letter is co-signed by 26 owners. The head of the Linking Melbourne Authority, Ken Mathers, replied on February 13 after a two-month interval, to say that Roads Minister Terry Mulder would respond ”in the near future”.

”I appreciate that this is a difficult time for you and understand that residents and property owners may be experiencing anxiety at this time,” Mr Mathers wrote.

The authority has said that the four-lane viaduct, between Parkville and the Port of Melbourne, is ”an essential component of the east-west link”.

”To achieve the full east-west link, it is necessary to provide the section parallel to CityLink between Footscray Road and near Flemington Road,” the authority said in its response to questions from the government planning panel assessing the road project, published this month.

The City of Melbourne has argued the viaduct does not need to be built until 2031, because CityLink could handle the expected increase in traffic.

The viaduct has dashed Melbourne City Council’s plans for urban renewal in that part of Kensington and the regeneration of Moonee Ponds Creek.

A government spokeswoman said the Kensington building was ”outside the project area and not subject to acquisition at this stage”. The Linking Melbourne Authority will speak with owners in coming months, she said.

The full east-west link is a planned 18-kilometre road between the Eastern Freeway and the Western Ring Road.

This site uses Akismet to reduce spam. Learn how your comment data is processed.