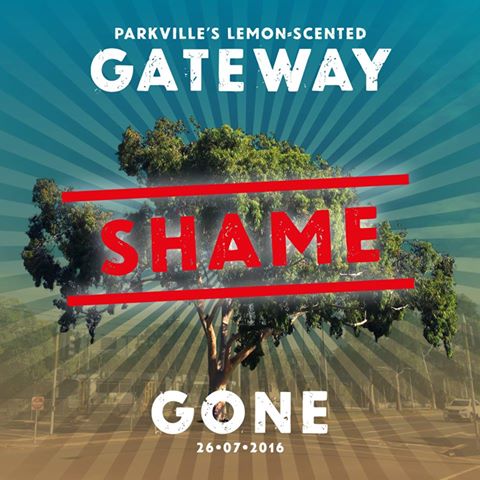 Tuesday 26th July 2016: Update from Guardians of the Flemington Road Gum: Our beloved Lemon-Scented Gum is now just a memory. A request to all meet and have a “minutes silence” tonight for those who were unable to attend this morning. Bring flowers if able! Does 7pm work for everyone?

Sincere thanks to all who defended my place on Flemington Road.https://t.co/sxfLJMIiae pic.twitter.com/OsUwLe8RIX 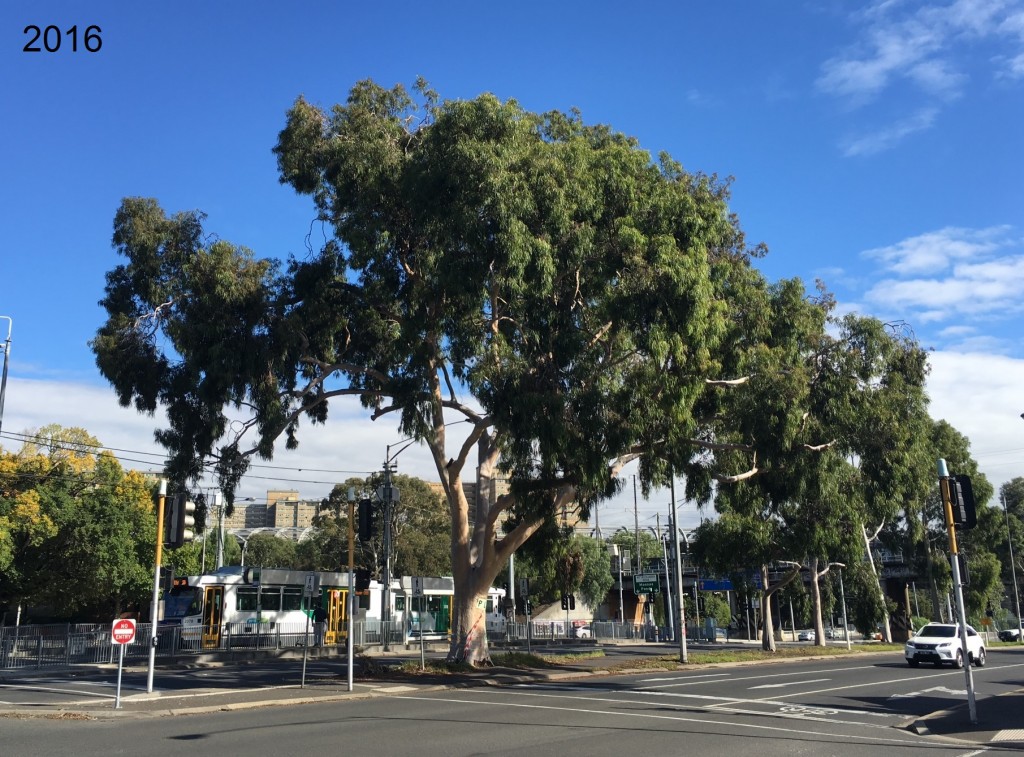 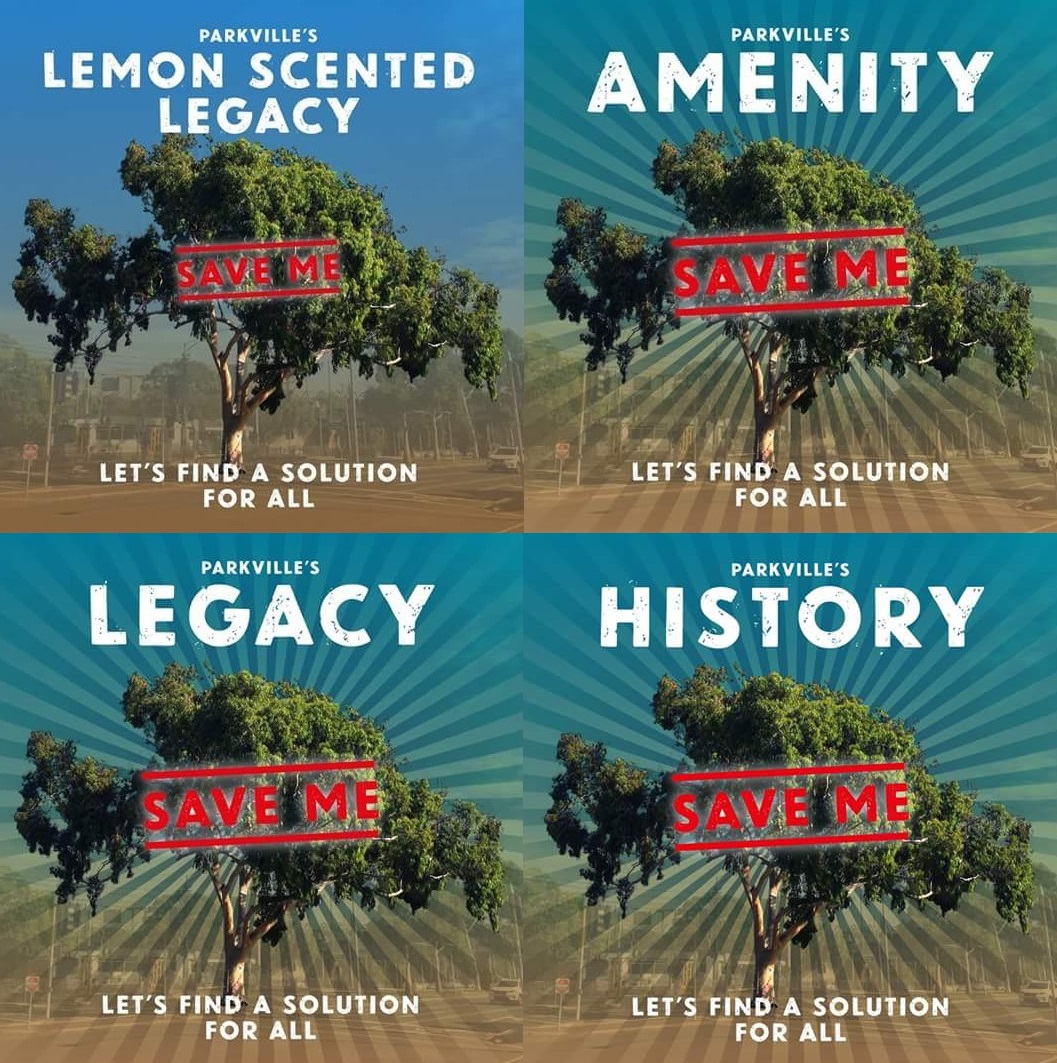 The Age: Protesters face off against police in bid to save Flemington Road gum tree (26 July 2016) Broede Carmody
Four people have been arrested for trespassing in Kensington as authorities cut down a 94-year-old tree on Flemington Road. The arrests occurred after a group of about 10 protesters chained themselves to a tree. The four protesters who were arrested have been released pending further inquiries.

VicRoads is cutting down the tree to make room for the CityLink-Tullamarine Freeway widening project. Christine West, from Parkville, was among the group of protesters who were told to leave the area so the native tree could be cut down. “We’ve been been given the official request to remove ourselves because they’re going to cut down the tree whether we like it or not,” she said.

“Anyone who doesn’t move them themselves in a reasonable timeframe will be arrested. Some people will stay. We’re pretty determined.” A police spokeswoman said police were aware of the planned removal of the tree on Flemington Road.

“Police will be present and monitor the situation to ensure the works can be completed safely,” the police spokeswoman said. The tree was originally meant to be cleared in April, however, the removal was rescheduled to Tuesday amid concerns from local residents.

ABC Victoria: Police cut chains from woman protesting against removal of iconic gum tree in Melbourne (26 July 2016) By Joanna Crothers and staff
Police have cut the chains around a woman protesting against the removal of an iconic gum tree in inner Melbourne. The Lemon-scented Gum on Flemington Road in Parkville was due to be removed as part of works to widen Melbourne’s CityLink tollway and Tullamarine Freeway.

Protester Ann Read chained herself to the tree in a bid to prevent it from being chopped down. However, police cut the chains and removed her and at least three other protesters from the road to allow contractors with chainsaws to start cutting the tree down.

Dozens of protesters and locals earlier surrounded the tree, carrying signs and calling out “stop the chop”. “It’s served a lot of people. It’s a shame that something like this is happening,” one protester, named Max, said.

“This is Melbourne’s tree. It’s our tree, it’s your tree and it’s a shame that this has happened.” Acting Inspector Andy McDowell said police understood the tree was a sensitive issue and tried to prevent protesters from harm. “Our role today was to ensure that the management of the tree could be undertaken without any disruption, and also to provide safety to the community,” he said.

“We understand there is some sensitivities associated with it, but the reality is, the works need to be done.” Ms Read said the tree, which was classified by the National Trust in 1982, was one of the oldest in the area and about 120 years old. Tree had to be removed, VicRoads says

Sue Freeland, part of the Guardians of the Flemington Road Gum, said the group had presented VicRoads with a redevelopment design that would see the tree remain. “If we just start removing all our natural features and all of the great amenities in our local areas then we’re going to be less-than rather than more-than in our pursuit of progress,” she told 774 ABC Melbourne.

“However, the traffic improvement work we do on Flemington Road must meet Australian safety standards. Unless we acquire homes in the area or restructure the tram lines, which will both have a major community impact, the traffic island and the tree had to be removed.”

More than 2,900 people had signed a petition calling for the tree to be saved.

Herald Sun: Parkville lemon-scented gum tree on Flemington Road set to be chopped down (26 July 2016) Therese Allaoui, Natalie Savino, Herald Sun
Four protesters have been arrested and charged with trespassing after police were forced to remove them from the lemon-scented gum tree. It comes as the organisation responsible for the removal of the tree defended its actions.

Police spokeswoman Amara Bostock said nine people chained themselves to the tree in protest before police arrived. Four protesters who refused to move were arrested and charged with trespassing. They have been released pending further questioning and investigation.

Dozens of police officers were deployed to keep the peace as the tree, near the intersection of Flemington Rd and CityLink, was removed. Police were forced to carry Pauline Galvin, 51, of Coburg, off the tree when workers came to start sawing it down.

Ms Galvin said it was “pathetic” VicRoads decided to cut down the tree “without public consultation”. “They had to carry me (off the tree),” she said. “Humans need trees. We can’t exist in a concrete gutter. “This tree was planted in the 19th century and it’s the same attitude that VicRoads and Transurban have got.”

Ms Galvin said removing the tree, and the planned works, would bring greater congestion to the area. “It is insane. It is absolutely, completely mind-bogglingly ridiculous,” she said.

“Today we have removed the lemon scented gum tree on Flemington Rd,” he said. “We would not remove the tree if there was an acceptable alternative option.

“Unless we acquire homes in the area or restructure the tram lines, which will both have a major community impact, the traffic island and the tree (had) to be removed,” he said.

Sue Freeland of Guardians of the Flemington Rd Gum, which had rostered people to watch over the tree around the clock, said workers had arrived with chainsaws just after 11am and fenced off the area. She labelled the action “despicable behaviour” and claimed their group had come up with an alternative intersection design that not only catered for the project’s aim but considered environmental consequences, wildlife corridors and amenity.

“It’s a very despicable sound (chainsaws) and it’s very despicable behaviour,” Ms Freeland said. “We have an intersection that now has no avenue of trees; we have just a big bitumen space, which will be a loss to the community. “It’s the loss of an icon that’s been a significant tree here for over a hundred years. “It’ll be a loss to the entry of this area of Melbourne.”

But protesters refused to back down, saying the path of the proposed road and bike trail in the area should be altered instead.