Show your support for a federal ICAC 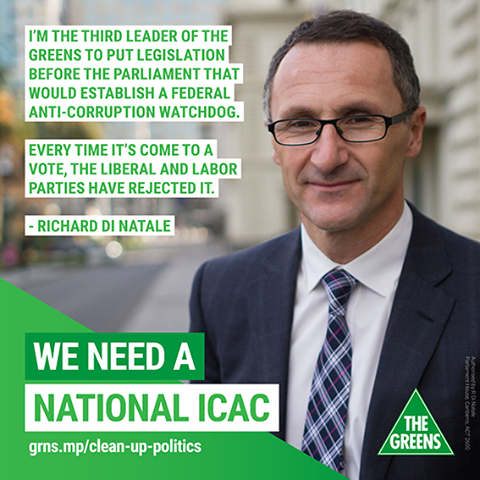 Show your support for a federal ICAC: dodgy megaprojects like East West Link, WestConnex and Perth Freight Link must be held up to scrutiny.

The Australian Greens: We need a national ICAC

Every State now has an anti-corruption commission. The Federal government is now the only jurisdiction without the infrastructure to confront corruption. Every time wrongdoing is exposed, one-off reviews or ad-hoc investigations are launched.

We need a permanent commission to prevent corruption occurring and investigate claims as they arise. The Greens already have a bill to establish a National ICAC before before the Parliament — now the Labor and Liberal parties just need to support it.  Add your voice to our call to clean up politics

Several reasons to support the call for a national ICAC:

Tony Abbott ‘ignored advice’ over East West Link (19 January 2016)
ANAO’s East West Link report is a potentially eye-opening, rollicking read of stupidity and poor processes, released less than a week after Victorian Auditor-General’s Report on East West Link. We say “potentially” as many of us realised in 2012 that East West Links chaotic trail led back to Abbott.

Labor asks for audit of all infrastructure spending after East West Link findings (6 January 2016)
The schadenfreude is seriously flowing today with Anthony Albanese calling for the Coalition’s entire megaproject program to be independently investigated in the wake of East West Link reports from the Victorian Auditor General and Australian National Audit Office, and last months WA Supreme Court ruling into Roe 8.

East West Link “Letter of Guarantee” demands investigation (6 February 2015)
Here is a copy of the East West Link “side letter” to the consortium, signed by the Napthine Government that blackmails Victorian taxpayers. The timing of this document being signed before November 2014 State Election surely demands further investigation via either a Royal Commission, the Independent Broad-based Anti-corruption Commission (IBAC), if it had beefed up powers or a federal Independent Commission Against Corruption (ICAC).