Residents living in the path of the Coalition’s #EWLink are rejoicing, after @DanielAndrewsMP‘s win. #VicVotes #9News pic.twitter.com/NIJtk9AxI8 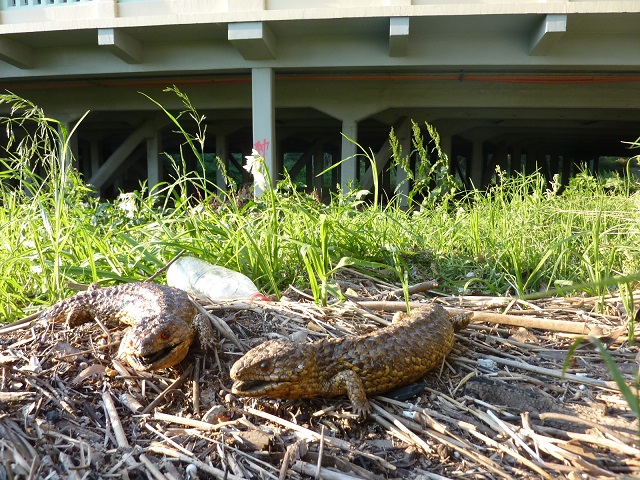 Even the skinks of Moonee Ponds Creek and Royal Park appeared happy on Sunday afternoon.

Homeowners in the path of the East West Link have celebrated Labour's victory.

Mary should be offered her property back immediately!

Posted by Yarra Campaign for Action on Transport on Sunday, 30 November 2014

Mr Andrews is today seeking advice from government bureaucrats about releasing the business case and all documents relating to the tunnel project.

Throughout the campaign, Mr Andrews has maintained the East West Link “isn’t worth the paper it’s written on” and has vowed to tear up the contracts, which were signed just before the Napthine government went into caretaker mode.

Starting an audit of the state’s hospital bed capacity, beefing up TAFE funding and setting up a royal commission into family violence are the top priorities for the new Labor government, Premier-elect Daniel Andrews has vowed.

Ahead of briefings with bureaucrats on Sunday afternoon Mr Andrews said Parliament would sit before the end of the year, with back to work legislation designed to stimulate job growth set to be the first bill tabled.

Releasing the documents was due to be discussed at Sunday afternoon meetings. Earlier on Sunday Mr Andrews reiterated that Labor would not build the East West Link.

Discontent about the lack of transparency around the costings for the East West Link plagued Napthine, but it was not until Andrews promised to rip up the contract for the project that it became an election issue.

“I want to make it very clear it is my view that the Labor government has a mandate to release all documentation in relation to the East West Link, a secretive, rushed and botched project,” Andrews told reporters Sunday.