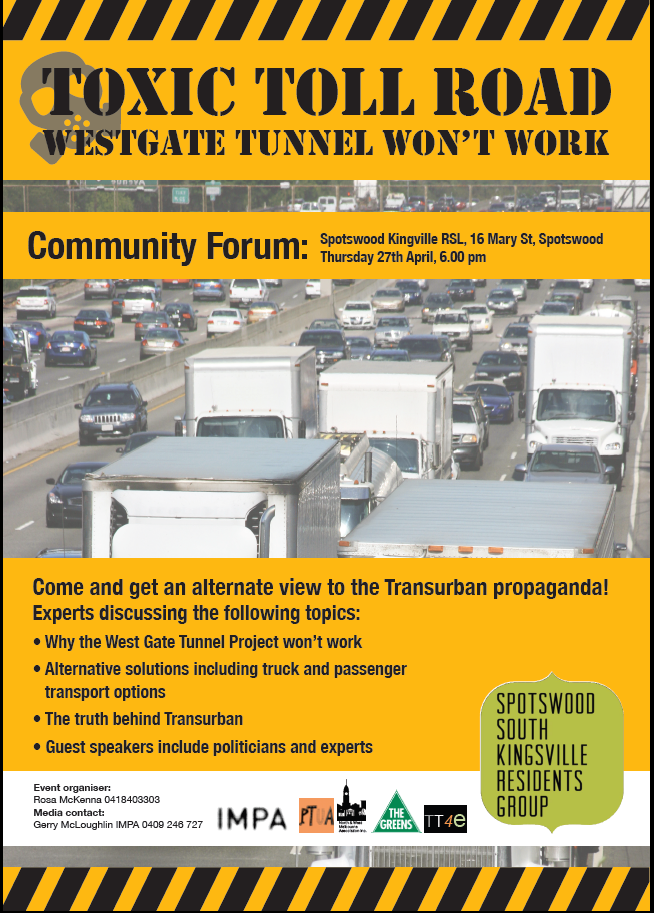 Message from Gerry McLoughlin at IMPA: Following from the very successful forum on the Western Distributor unsolicited bid proposal by TransUrban held at RMIT Centre for Design on 22 March 2017 BETTER WEST Community Group (member group of IMPA inc) with support from IMPA inc, PTUA, TT4e, NMWM and others have organised a Community Forum following the announcement on Sunday 2nd April 2017 of the TransUrban unsolicited bid West Gate Tunnel Project

We would like to invite you to attend this important event to hear from experts on Transport, Air Particulates and from Politicians how this project is a city changer for the worse and will not solve our very real freight on road conflicts to the entire inner Melbourne area.

The community is concerned with various aspects of this project not least the undemocratic nature of the insidious take over strategy of a privately owned transnational company of major public infrastructure. Other crucial issues include

Where is the strategic plan that supports this project? – there isn’t one. The Victorian Transport Integration Act 2010 all but ignored as is the Victoria Truck Action Plan and the projects that fell out of these policies of the previous ALP government

Dear Editor,
The Port of Melbourne (12/4) has implicitly admitted that touted “West Gate Bridge alternatives” have little to do with removing trucks from residential streets.

Reading the Port’s actual submission to Infrastructure Victoria, it’s clear the private Port operator does not see Port-related truck traffic as the main driver of either the West Gate Tunnel or the alternative East West Link western section. It is far more concerned with 24-hour access on existing routes in the inner west, and road upgrades that allow bigger trucks.
Confusingly, the Port is backing the western section of the East West Link (which was not committed to prior to the 2014 election), but as a route for non-Port-related traffic. In short it favours a 1960s ‘predict and provide’ approach to road transport, despite its demonstrated record in flooding cities with additional car and truck traffic, with all the attendant noise and pollution.

While there’s commendable support for a Webb Dock rail link, nothing at all is said about the stillborn Port Rail Shuttle, intended to provide a more comprehensive rail alternative to displace Port area truck movements. The push for more trucks masks the fact that alternatives are being ignored.