We accepted this Community Service of the Year Award on behalf of all those countless people & community groups who’s selfless actions have literally saved inner Melbourne, greater Melbourne and the entire state of Victoria from a deluge of heartache, financial mismanagement, dodgy deals and a whole pile of unknown nasty stuff.

Our collective victory in 2014 against the East West Link is the beginning of a much larger campaign for this state: world class public transport to be built across all of Victoria. Come and join us! 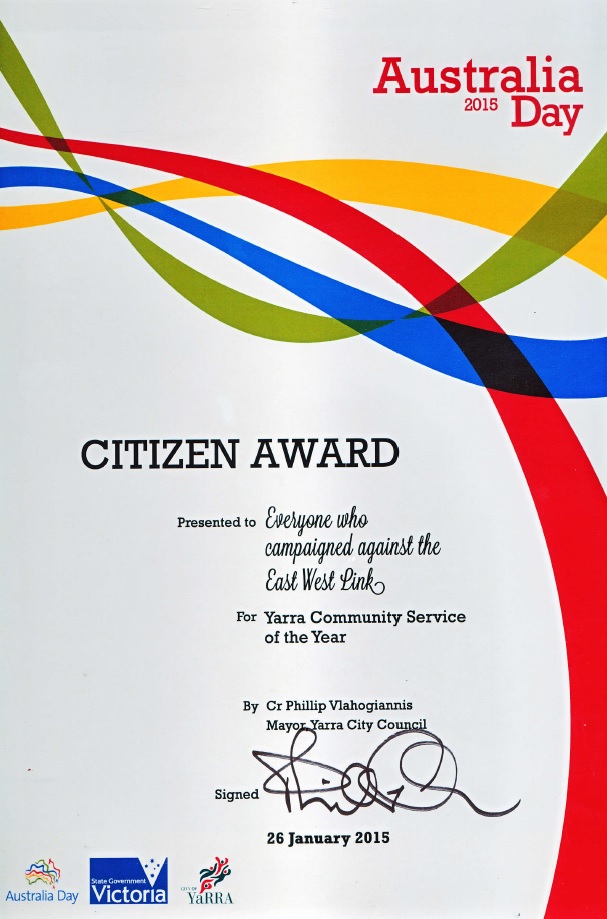 One of the East West Link protesters honoured with an Australia Day citizen award by the Yarra City Council says those who campaigned against the multi-billion dollar project deserve their gong.
James Milne, who is a member of the Residents Against The Tunnel group, told Tom Elliott that he was surprised by the recognition and said regardless of people’s views on the proposed tunnel, the award was about recognising the “community effort” people had put in.
“I don’t think you could argue in any way that this is ill-deserved,” he said on 3AW Drive.
“People put in this incredible effort and it was all about community.”
LISTEN: James Milne chats about his award and East West Link with Tom Ellott.

The Yarra City Council has given an Australia Day citizen award to “everyone” who campaigned against the $6.8 billion East West Link.

The grassroots campaign against the proposed road tunnel – the first stage planned to connect the Eastern Freeway with City Link – involved a number of community groups and individuals united under the slogan “Trains Not Toll Roads”.

Harriet Mantell, a member of Residents Against the Tunnel, accepted the Australia Day award from on behalf of those who participated in the campaign.

“We’re absolutely thrilled,” Ms Mantell told Fairfax Media. “So many diverse groups and individuals came together…because we understood that this was wrong.

“The award recognised the strength that individuals and groups can have when they unite together to fight.

“The campaign became much bigger than a local issue because it was something relevant to all Victorians: it was the money Victoria was going to spend; the debt we were going to incur for decades to come; the fact that it wasn’t a solution to our traffic problems…it was so many things.”

Protesters spent months fighting the project, targeting the offices of Labor MPs and construction giant Lend Lease – the preferred bidder for the first leg of the project.

“Thankfully we had great support from the council, which really started this campaign off back in June,” Ms Mantell said.

The campaign was largely funded by Yarra City Council, which amassed more than $400,000 in legal bills and spent a further $75,000 on pushing against the roal tunnel in nine months.

Labor pledged to dump the East West Link during the state election, saying it would cripple industry and create decades of traffic gridlock.The project was promptly scrapped after Labor claimed victory at the polls on November 29.

Premier Daniel Andrews’ government has steadfastly refused to build the road, despite concerns the compensation East West consortium could run up to $1.2 billion.

Ms Mantell said the award for the grassroots campaign was very apt on Australia Day.

“We always tend to think of people power as something that happens in other countries. We’ve just demonstrated that a group of individuals can come together and unite,” she said.

She hoped the award could be displayed publicly in one of the council’s community halls.

Greens MP Adam Bandt congratulated those involved in the campaign, via Twitter.

“We won! Yarra’s ‘community group of the year’ is the anti-EW tollway coalition, celebrating their great victory,” he wrote.