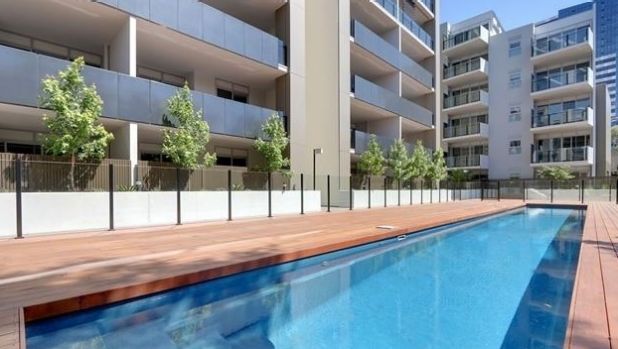 Get that EVO feeling!

Want to buy a luxury apartment with a chequered past and an uncertain future?

Pssstttt … those EVO Apartments in Parkville, across the road from Ross Straw Field, are up for sale. So much for this continuing shell game that the state government is playing via media releases, over dealing with Victoria’s homeless issues.

The Age: Homeless miss out as EVO flats acquired because of East West Link go on sale. Benjamin Preiss

Parkville’s EVO apartments, sold off the plan as offering a luxury lifestyle with views, were all acquired by the state government after it was revealed that the tower would be surrounded by roads as part of the East West Link.

When Daniel Andrews scrapped that controversial road plan, the government suggested the tower could be used to accommodate the homeless.

But that is not to be. The EVO apartments will soon be sold on the private market.

The government has confirmed its plan to sell the complex despite previously indicating some of the apartments could be used for social housing.

It is proceeding with the sale despite Infrastructure Australia recently nominating the East West Link as a top priority.

The previous Napthine government reportedly spent $90 million on the complex to make way for the East West Link.

“As we have previously said, the complex will be sold to get the best possible return for Victorian taxpayers,” he said.

“It’s clear they may well need to be acquired again at some stage in the future,” he said.

Salvation Army Housing Victoria chief executive Mark Dall said he had presented two options to the government to include a proportion of social housing at the apartment complex.

Under one of the options, the housing service would take over management of the apartments’ tenancies. Alternatively, it offered to buy the apartments at a reduced price.

In both scenarios Salvation Army Housing Victoria had proposed to include about 30 social housing units, with the remainder to be private housing.

He said the apartments were ideal for social housing and the Salvation Army could offer support services directly to tenants.

The state government announced this week that it would spend $60 million to increase the number of social housing properties on vacant or under-used land that is owned by the Director of Housing.

It is planning to work with the housing sector and construction companies to increase social housing by 300 new homes.

They are likely to be located in Braybrook, Clayton South, Bairnsdale, Dandenong North, Norlane, Morwell and Mildura.

The government will also spend $23 million to increase short-term housing for homeless people and $30 million to “kick-start” the redevelopment of the Flemington public housing estate.

It also announced earlier this year it would invest $152 million in a “housing blitz” as part of its response to the Royal Commission into Family Violence.

The waiting list for public housing has exceeded 32,000. However, a new register has been introduced that will soon consolidate the public and community housing lists.

“Releasing the EVO apartments to social housing will mean that 175 women and their children could put down roots and shut the door on homelessness for good,” she said.