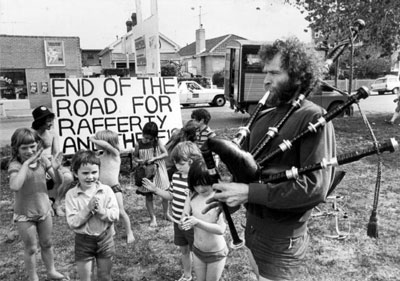 Image: A teacher playing the bagpipes and small dancing children from the Fitzroy Community School join in the anti-freeway protest on the median strip of Alexandra Parade. Several houses in the background have been demolished since this photo was taken.  Source: Picture Victoria.

Interview with Julie New – Stop the F19 Freeway Campaign Melbourne
I moved to Carlton when I was at University in the early 1970s and lived in Carlton at Roden Street, then Faraday Street before moving to Fitzroy.  I went overseas for a couple of years and returned when the F-19 was just gearing up. The barricades hadn’t gone up, but the campaign had been happening for quite some time. There had been diplomatic, quieter attempts to try and stop it. There were articles in the paper about lead in the air and what that volume of traffic was going to do to Carlton, Fitzroy, Clifton Hill and Collingwood.

I got involved in the campaign because of my desire for social justice. I was disgusted with the lack of government concern for locals and was also worried about the environment. Some of this awareness had come from what had happened around the Commission flats battles. The F-19 was going to knock down housing and cause pollution for those living nearby as well as increase traffic congestion in the area. I was shocked at the disempowerment. 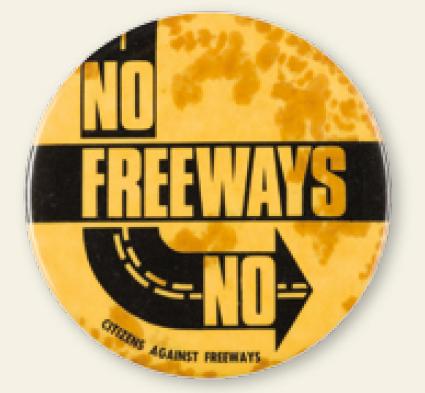 Image:  Badge produced by the group Citizens Against Freeways, c 1977. Source:  Protest! Archives from the University of Melbourne. 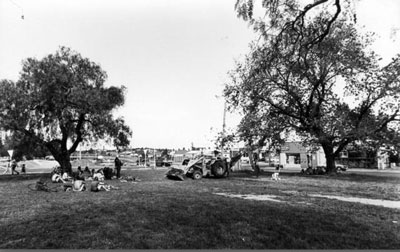 Image: A group of residents on the Alexandra Parade median strip, near the intersection with Gold Street, on a warm summer’s day.

A front end loader is parked on the grass, incongruously juxtaposed with a baby’s pushchair. In the distance various road-building machines and piles of dirt mark the progress of freeway building.  At this stage resident protest against what was then called the F19 Freeway (now the Eastern Freeway) was taking a peaceful form.  Source: Picture Victoria. 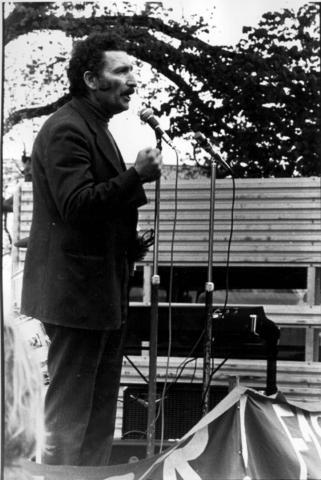 Image: Councillor Theo Sidiropoulos makes a speech at the anti-freeway demonstration in Alexandra Parade, where residents had constructed a barrier. Source: The Melbourne Times.

New Internationalist: The Battle of Alexandra Parade by Bob Hawkins (October 1980)
The State – Victoria by name. The capital Melbourne – Victorian by transport. It really is a public mobility nightmare. But for the privately mobile, the going is great until those last thousand or so metres into the city heart.  It’s little wonder the ‘private’ way of travel is the popular way. Melbourne is a monument to freeway mania and how not to organise a public transport system. 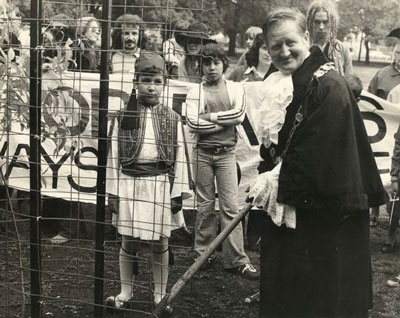 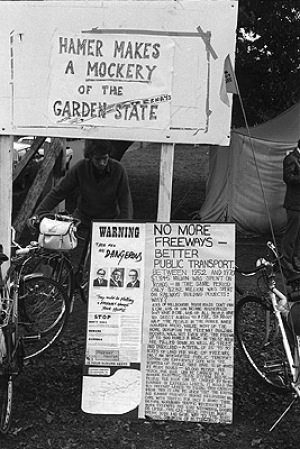 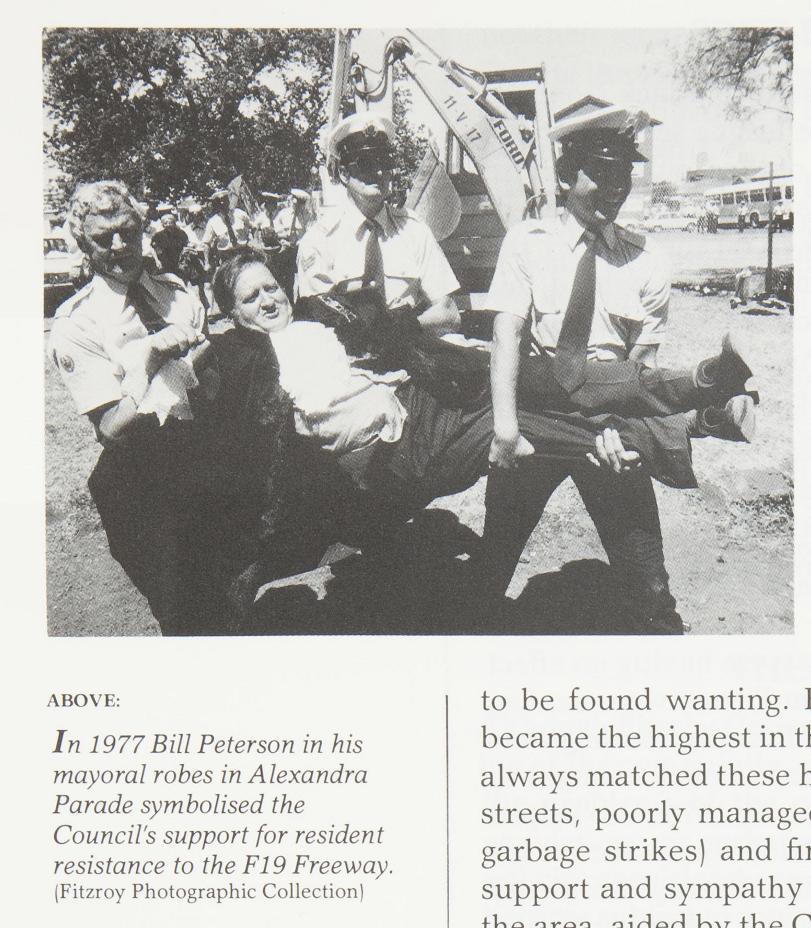 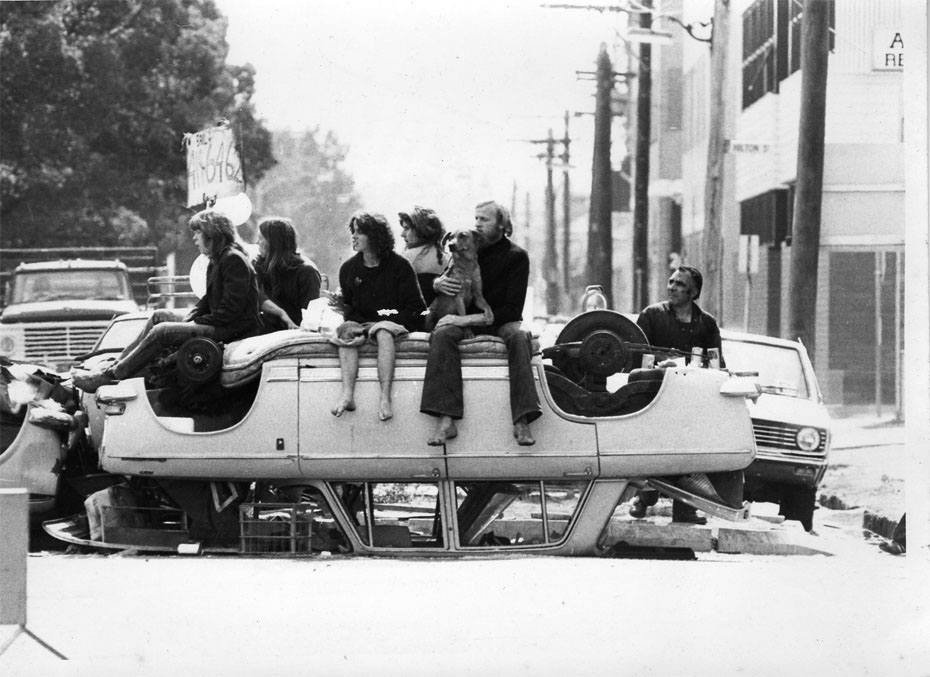 Barricade – the fight against the F19

Image: Community protests on Alexandra Parade at Hilton Street, Collingwood, from Barricade! – the fight against the F19. Source: Tigerulze

Lee Street: Interview with Trevor Huggard – University of Melbourne
Then of course the F19 Freeway brought a new freeway threat to our door. I remember spending a night in the City Watch House. (Had it not been for John Howie bailing me out that night I would never have been allowed, because of the law, to become Lord Mayor of the City of Melbourne)  We were just down there defending our rights, living in tents and doing what we could at the time.

There were some 4,000 people camped on the nature strip that night. The police came down and started, without any warning, laying into all the students with batons and really beating them up. We put up the expected resistance and finished up in Russell Street for the night.

That’s pretty frightening. It was probably much more frightening to me than any of the other battles because I really didn’t believe until then that the police would use that kind of show of force and, without provocation, such violent action. That was the mid-seventies, not long ago. 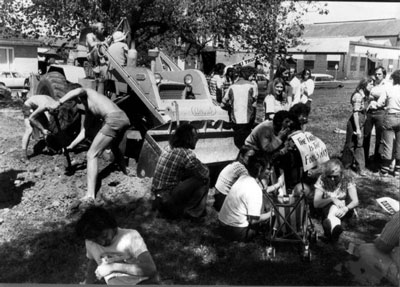 Image:  Residents and other anti-freeway protesters surround earth-moving plant on the Alexandra Parade median strip. In the foreground are Councillor Marion Miller (in dark glasses), Janet Taylor of the Collingwood Historical Society, and her son Sam in the pushchair between them. The freeway protest was of long duration and at this stage residents were taking it in turns to maintain a vigil at the site. Source: Yarra Libraries. 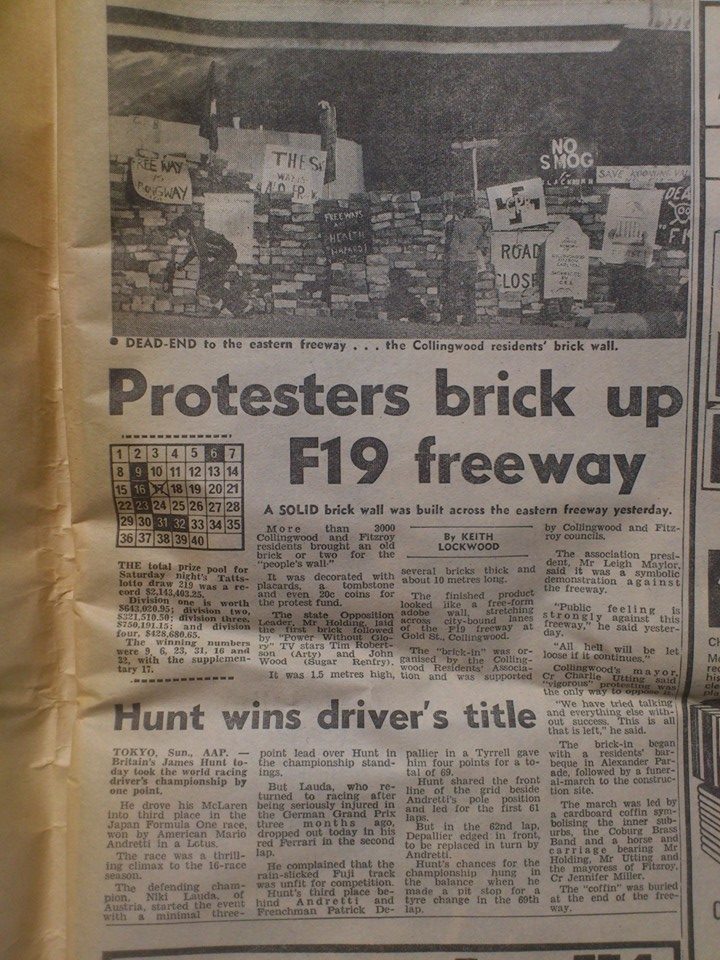 Image: Alexandra Parade Protests, April 1977 – aerial shot showing the resident barricades, the “brick in”, Citizens Against Freeways 24 hour office and a quite large police presence. Source: How to Make Trouble and Influence People.

Image: Keith Dunstan at F19 freeway protest, 30th April 1977. Photo by John Ellis. Extended protests were held during the building of the F19 freeway (Alexandra Parade-Doncaster). On this occasion the freeway was dubbed the biggest bicycle track in the world. Keith Dunstan, “Sun” journalist and daughter feature. Keith was the founding president of the Bicycle Institute of Victoria, (Bicycle Victoria, now Bicycle Network Victoria)  Source: University of Melbourne Archives.

All that harrumphing in the 1990s and 2000s about stroppy young people riding bicycles on freeways & in tunnels isn’t new at all. 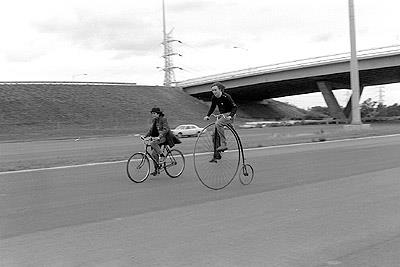 Friends of the Earth – Chain Reaction (1977)
In the 1977 barricades were thrown up on Alexandra Parade in the inner suburb of Collingwood (Melbourne) to oppose the construction of the F19 (later renamed the Eastern Freeway). With strong community support, this campaign was a key activity.

When Fitzroy and Collingwood Councils, which strongly opposed the freeway extension, brought the issue to a head by narrowing the intended approach road to the end of the freeway, the State Government reacted “furiously, by taking the road out of the councils’ control and calling in 400 police.

The ensuing guerrilla war raged for six weeks, with residents making a significant impact on the Government and the police making 58 arrests and causing several very serious injuries to demonstrators.’ Source:  Page 15: Friends of the Earth – Thirty Years of Creative Resistance. 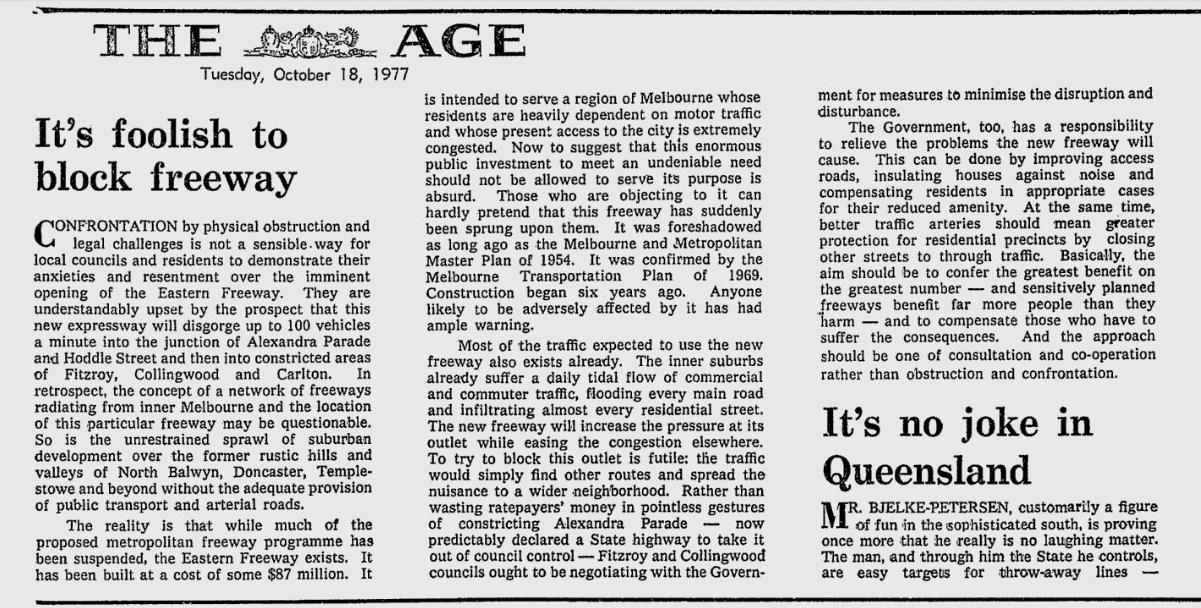 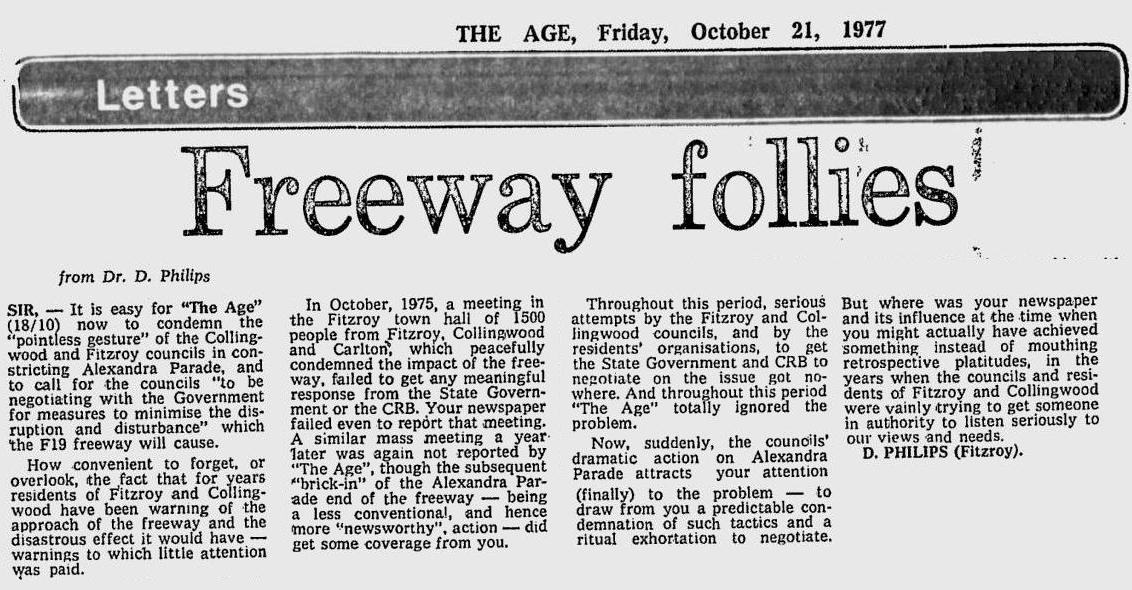