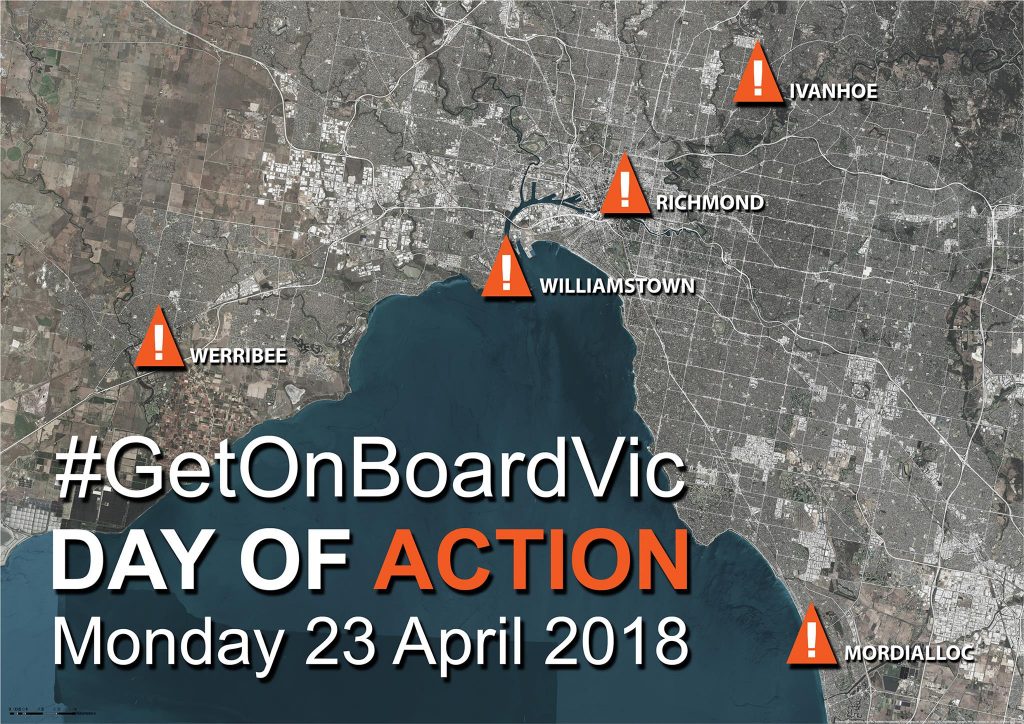 The Victorian State Government has teamed up with private interests like TransUrban to choke Melbourne with roads, roads, roads, leading to congestion, smog and tolls.

We know Melbournians want real, long-term solutions to Melbourne’s growth problems, NOT more roads. Our future as the world’s most liveable city depends on investment in sustainable public transport that works for all.

ONE WEEK before the budget is released we need to show our local MPs that we don’t want big bucks for more roads! We need to get our budget on balance by ramping up investment in public transport, local bike & walking infrastructure, shifting freight onto rail and more!

Bring along your friends, family, loved ones and even your dog to join the simultaneous, Melbourne-wide protest as we share our frustration with a Labor government who is pouring billions into new road projects.

Come tell our leaders we want a healthy, walkable, easy-to-get-around city that works for all, NOT just those who drive.

Join us on #GetOnBoardVic Day of Action this Monday 23rd April at your local member’s office below:

Community groups across Melbourne have combined to voice shared concerns that the Victorian Government is locking in the wrong projects for Melbourne’s future. Facing projects in every corner of the city from the West Gate Tunnel to the North East Link, the resuscitated East-West Link, and the Mordialloc Freeway, Melburnians are joining forces.

Melbourne’s transport budget is out of touch with big bucks handed over for mega roads, while public transport lags.

Community member from the north-east, Michelle Giovas, expressed concern over the money committed: “Fast tracking the North-East Link mega project is extremely alarming and unfair. The impact to local residents and the environment will be significant and permanent, as well as all Melburnians struggling to move around the city. It compromises future public transport options for the area.”

In Melbourne’s south-east, local Alex Breskin added:
“The upgrade of the ‘Mordialloc Bypass’ to ‘Mordialloc Freeway’ confirms our fears this road will adversely impact the local environment, and further divide our community. It entrenches car-dependency, when we know this money could be spent on improving public transport in the area. Residents would much rather new solutions such as those proposed by the Rail Future Group with light rail that links our communities rather than an outdated freeway that would go nowhere.”

These concerns are echoed across the city, with Spotswood resident Rosa McKenna saying:
“The West Gate Tunnel project will lock in car dependency from the outer west creating more local traffic congestion and impacts on scarce local open space and community facilities. It hands over planning and operating transport infrastructure to private for-profit companies like Transurban. This doesn’t sound like Labor values to me.”

Today communities call on politicians to follow through on 2014 election promises: a functioning public transport system, freight off roads, and listening to community concerns about air quality and health impacts. The budget announcements for public transport are overwhelmed by the big dollars being committed to road projects across the city.

The growing coalition of organisations from across the city spans from north to south, eastern to western suburbs.

“Governments continue to fail their communities, with no vision for transport in Melbourne,”said Rachel Lynskey, Sustainable Cities spokesperson for Friends of the Earth.

“We continue to see budget commitments to more roads, creating more congestion and pollution, despite all the experts telling us roads won’t solve these problems.”

These projects share similar features from fast tracked consultation and funding, failing to reflect proper integrated planning, sham consultation which dismissed evidenced based community health impacts, will burden Victorians with decades of tolls, and are designed to attract traffic!

Media will have an excellent opportunity to capture photos and quotes from a range of community members.