A VicRoads map obtained by The Age shows Hoddle Street being extended as a major six-lane+ road through North Fitzroy to join St George’s Road. 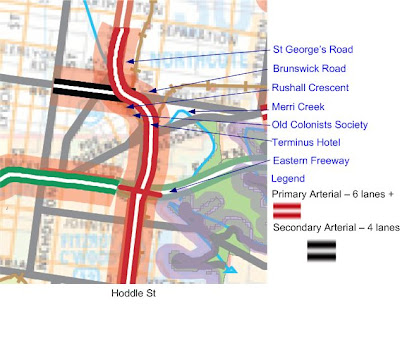 The 3068 Group has grave concerns for the heritage buildings and landscapes in the path of the proposed arterial road, including The Terminus Hotel(1854) on Queens Parade, The Old Colonist’s Society, Thomas Kidney Reserve and the Inner Circle Linear park.

Richmond MP and Housing Minister Richard Wynne, denied any Labor plan for major roads in the seat. The Age 20th October 2010. However the VicRoads map obtained by The Age: ‘Plan for hundreds of kilometres of new freeways’  (Clay Lucas October 11, 2010) was  enthusiastically endorsed by the RACV’s Brian Negus.

Plans for very real North East Link over Heidi in Banyule that is now “Part of the Plan” were famously denied by then Transport Minister Peter Batchelor who told parliament (October 9, 2001).

“an issue that has been circulating in his electorate and surrounding electorates: a fear campaign, a smear campaign, that has been run by a number of people … There is a very wrong suggestion that the government has a proposal to build a freeway through the Yarra Flats to link the Eastern Freeway with the northern metropolitan ring road. I put on the record that the government has no such proposal under consideration… It is not on our radar… There is no truth in the suggestion.”

But as Kenneth Davidson reported , a secret ministerial briefing that occurred a week earlier (October 1 2001)  was “discovered” by transport academic Paul Mees and the PTUA that showed the government had plans for a road to:

“be considered on a southern alignment, constructed partially in a tunnel, to link the eastern end of the Metropolitan Ring Road at Greensborough to Bulleen Road” Why the missing link couldn’t be kept from the public (The Age November 7 2002)

The latest denial merely gives the proposed Hoddle Street Extension the same status as Sir Rod Eddington’s East-West Tunnel. Its not on the agenda for the current electoral cycle – but still part of the plan.

History of the F2 Freeway

The 2040 plan is disturbingly similar to the 1969 Freeway Plan for Melbourne, itself a derivative of the 1949 Freeway plan for Los Angeles. 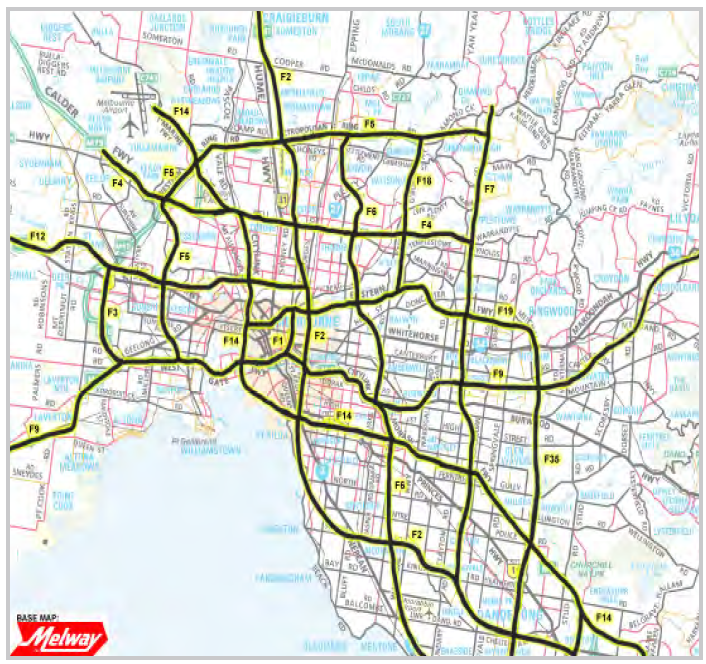 The 1969 plan included the notorious F2 Freeway that would have turned Merri Creek into a road link between the Hume Freeway and St Kilda. That road was only stopped by vigorous community protest and a community blockade.

VicRoads has a history of planning in secret and then lobbing government alongside the RACV and other pressure groups like VECCI and the Committee for Melbourne.

As funding becomes available, freeways are built at the points of highest congestion and least public resistance but in such a way as to build up an argument for “missing links”.  Current road projects, such as the North East Link, fit this pattern of secrecy and denial.

It is to be hoped that community outrage would prevent VicRoads from pursuing this part of the plan.

It is easy to deduce that an extension would increase traffic volumes in the area.

The extension could potentially  be  used to inflate traffic volumes to justify the cost of any  grade separation (overpass) at Victoria Parade,  Johnston Street,  Bridge Road and Swan Street.