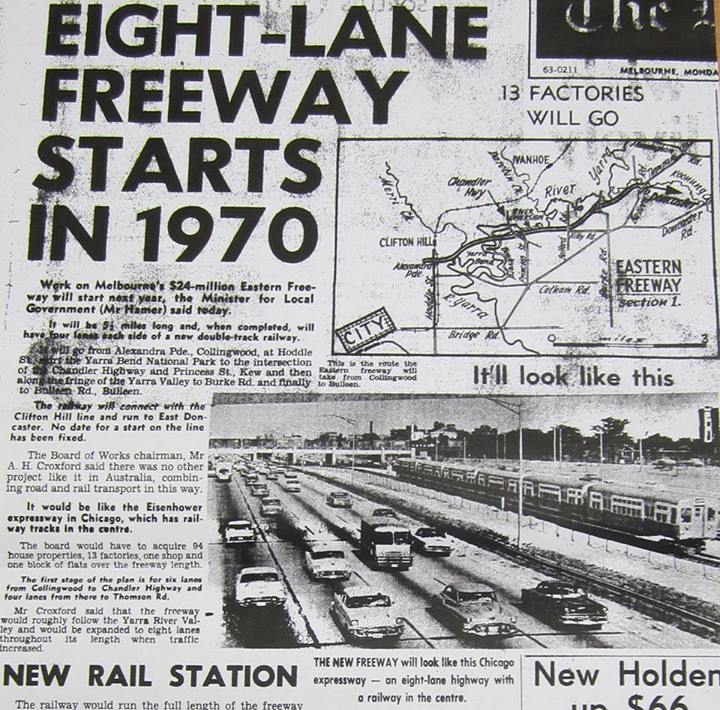 Image: From the Melbourne Herald, 26 June 1969 – how the Eastern Freeway was meant to look: with a railway to Doncaster in the middle. Source: PTUA facebook 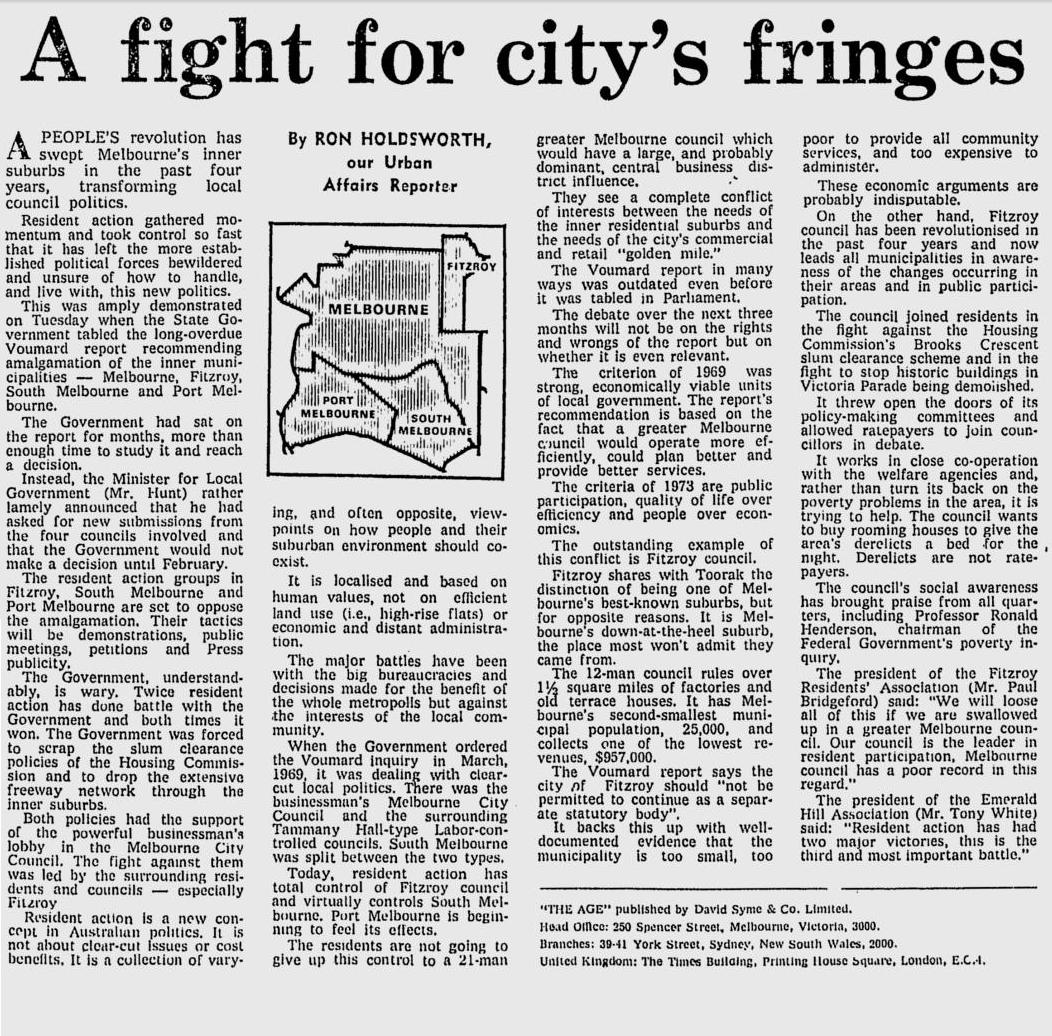 The 1969 Melbourne Transportation Plan was a road and rail transport plan for Melbourne, the state capital of Victoria, Australia instituted by Henry Bolte‘s state government. It outlined most prominently an extensive freeway network, much of which has since been built.

The plan recommended 510 kilometres (320 mi) of freeway for metropolitan Melbourne, as well as extensive rail works, including the city underground loop and two new lines to Doncaster and Monash University (now Clayton Campus) which were however – never built. Despite the majority of the printed material being devoted to non-car transport, 86 per cent of the projected budget was devoted to roads and parking, with only 14 per cent to other forms of transport. Source: Wikipedia.

Image: Dight’s Falls in the 1970s. A view from the Studley Park side of the Yarra showing Dight’s Falls in the foreground, probably taken while freeway construction was underway. The old Austral Silk Mills buildings in Trenerry Crescent had not yet been demolished and the gas holder in Alexandra Parade was still in use. Source: Picture Victoria.

Image: 1970s Freeway construction. Work on the freeway entrance and the access from Hoddle Street. The shot tower and houses are visible in the background. Source: Picture Victoria.

Public Transport Users Association: Planning for Roads
The Country Roads Board (predecessor to Vicroads) adopted the 1969 freeway plan as its blueprint, and the road lobby has campaigned piece-by-piece for its implementation ever since. In the map of the 1969 plan we can already discern the Scoresby Freeway (F35), the Merri Creek Freeway (F2), the Western and Northern Ring Roads (F5), the Eastern Freeway (F19) and the proposed Eastern Ring Road through Heidelberg (F18).

Victoria’s road planners have pressed for these freeways despite the public opposition that has developed since 1969, and despite the discrediting of the analysis that underlay the original plan. Just two months after the release of the plan, the great ‘Freeway Revolt’ was kicked off in America by the Governor of Massachusetts, who cancelled all of Boston’s inner-city freeways. In March 1973 Victoria’s Premier Rupert Hamer did likewise, cancelling most of the inner-city freeways in the 1969 plan. Meanwhile, the Whitlam Government was threatening to cut off all Federal funding for urban freeways. In due course the 1969 plan was to be described by transport specialists in less than enthusiastic tones as:

…an unconvincing work presented with all the glib political clichés that one has learned to distrust. It is based on the earlier American transportation study techniques, by now thoroughly discredited. – J.M. Thompson, 1977

The planners in the CRB persisted despite the apparent setbacks.

Go quietly on freeway matters at the moment…these are frustrating times for us all, but the pendulum will swing our way again. —private memo from Chairman of CRB,  1973

Indeed, ever since the late 1970s the road lobby’s fortunes have been improving inVictoria. Despite ongoing public opposition to freeways, a succession of State Governments has been content to give the road lobby more or less free rein, either overtly in spite of public opinion, or covertly under the excuse that ‘there is no alternative’. Even under less sympathetic governments, Vicroads and its predecessors have successfully lobbied for freeways by relabelling them as ‘arterial roads’ or ‘bypasses’, by trumpeting dubious economic benefits, or by proposing them a little at a time. Source: PTUA: It’s Time To Move (2002)