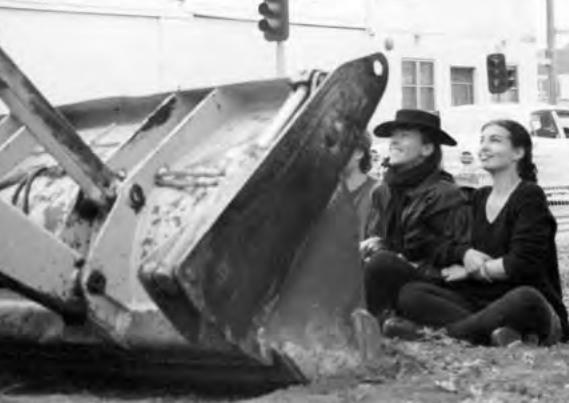 Green Left Weekly: Anti-freeway activists on trial (Tuesday, October 10, 1995)
Melbourne — Fourteen people arrested in the campaign to halt the Eastern Freeway extension were sent to trial last week. The Coalition Against Freeway Extensions (CAFE) is organising a rally outside the magistrates’ court on October 10 in support of the 14 and to protest against the extension. Fifty people have so far been arrested in direct actions to halt the bulldozing of Alexandra Parade.

Of these, 11 had their charges dismissed in March, when the court found the state government had acted unlawfully by not carrying out an environmental effects statement (EES). The government then changed the law to remove the right of community consultation through an EES. Following the destruction of most of the natural and building heritage along Alexandra Parade, the likelihood of further extensions through Doncaster and Ringwood, providing a freeway link to Tullamarine airport, has spurred continued community opposition.

Campaign Against Freeway Extension (CAFE) newsletters from 1994 – 1995, one of the points in the long fight against inappropriate road developments in Melbournes inner suburbs

Local Protests Quietly Swept Out Of The Road: The Sunday Age (August 13, 1994)
Barbara  Sullivan was woken by the call at 8am last Sunday – VicRoads crews were ripping through the elms of Alexandra Parade, could she get down there to protest, and quickly? By 8.30am, three VicRoads teams with chainsaws, backed by 37 police, were “on their last lap” of the median strip plantation. Thirty minutes later, 17 elms and dozens of other trees were felled to the base and two old buildings on the corner of Nicholson Street simultaneously razed to rubble. By mid-morning, the once-graceful elms, said to be almost 100 years old, were mulch.

Like 40 other protesters who gathered to watch the slick – and unannounced – operation, Ms Sullivan, who lives four blocks away in Easey Street, was stunned.

Almost 300 people had been on stand-by to protest, but most of them were asleep when the workmen moved in to widen the road, a plan residents have been fighting for months.  “By the time we became aware, it had all happened,” she said. “VicRoads told us no trees would come down in August – we were lied to. There’s a good deal of ill-feeling among local people now.”  Ms Sullivan is a member of the Coalition Against Freeway Extensions, a group formed three months ago partly to tackle the $12 million widening of Alexandra Parade.  Source:  Google News Archive Search