Continual state government inaction on building Doncaster Rail has inspired numerous creative actions, including Doncaster station mockups, ghosts from 1888 wandering through Doncaster Shopping Town and an particularly fine example of direct action in December 2013, where locals took it upon themselves to form the Community Rail Authority and duly commence construction in Fitzroy.

Ghosts of Promises Past. Fifteen ghosts from 1888 Melbourne were seen shopping at the Doncaster Shopping Centre this Christmas.

After shopping, they queued and waited for the train, and waited and waited. So polite and quiet these Victorians, so well dressed. “What are they doing?” the watchers whisper to each other. “I think they are waiting for the train,” someone says…and the rumour goes around the shopping centre.

“We’re waiting for the train.”

This four minute film records the event, the crowds, the ghosts, the queues, the newspaper headlines, the looks, the costumes. The crowds loved it. The performers … they were just waiting for the train…

Special thanks to Rose Chong Costumiers.

Manningham is the only Melbourne municipality without a train or tram. Artists For Trains Not Toll Roads show very politely that 125 years of empty politicians’ promises is not good for the eastern suburbs, for Melbourne, for the envionment or the tax payer. We want a Doncaster Rail line, not a tunnel. Public transport for Victorians!

A train line to Doncaster in Melbourne was first proposed in 1890, detailed planning commenced in 1969, and by 1972 the route was decided upon.

On 15 December 2013, after waiting 123 years for successive Victorian Governments to make good on their promises, the locals got tired of waiting, so the newly-formed Community Rail Authority took matters into their owns hands and starting building the track along Alexandra Parade, Fitzroy. Hey, at least it’s a start! 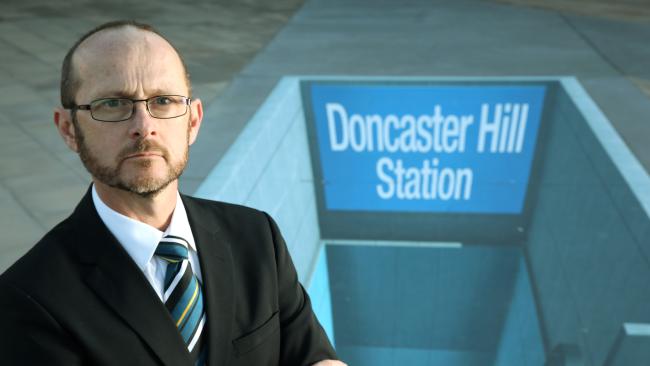 Manningham Council is scaling back its campaign for the Doncaster rail line thanks to apathy from both politicians and the public.

In the latest blow for the long-awaited rail line, Premier Daniel Andrews avoided committing to building the Doncaster Rail following the completion of Melbourne Metro project.

During a wide ranging community discussion on the website Reddit last week, Mr Andrews was asked whether there was a “chance” the rail line would be built following the construction of the new CBD loop.