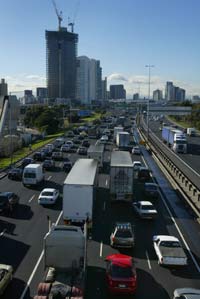 The release of the Victorian Transport Plan is looming and the announcement will probably be made in the next ten days if not sooner. Unfortunately, it is as expected, likely to be bad news.

You will have gathered from recent media reports that a number of key recommendations from the Eddington report are likely to proceed. There is no indication that the government’s stated intent to preference new roads over sustainable transport has abated. Our sources, though this cannot be taken as gospel, and a number of strategic government leaks indicate that the road projects expected to be announced this week include:

We have been told that the Royal Park section of the East-West Tunnel will not proceed but will probably be rescheduled to start in 2014 and that Caulfield to Footscray road tunnel will also go on hold until 2014. The reasons for postponement of the East-West Tunnel are seen to be the government’s very real concern that if they proceed, at this time, they will loose their inner Melbourne seats. They are apparently still confident that the Labor’s western heartland is safe.

There is no doubt that if the above is proved correct YCAT’s actions, in association with other action groups, have significantly influenced Labor’s decision and that the suspension of the East-West Tunnel is a form of victory. However, we need to remember that if the proposed elevated freeway proceeds in the west it will make the East-West Tunnel inevitable and that the community’s fight for sustainable transport is only just beginning.

It is very important that we attend the protest planned for the launch of the Victorian Transport Plan.

The Coalition for Transport Action Groups (CTAG) met last Wednesday, 26 November 2008 to organise a protest. This will coincide with the launch of the Victorian State Transport Plan. The protest includes speakers, an open mike and street theatre.

YCAT needs you to be there but you may only have one (1) hours notice so be prepared!

Telephone Tree – In order to notify people we have set up a telephone tree and if you would like to be notified but have not given us your contact number or can’t remember if you did please send your name and mobile number, in confidence, to info@ycat.org.au.

As soon as we know the date, time and location of the launch we will contact you by phone or email.

Please make every effort to be there our future depends on it!