Your invitation to the launch of Melbourne’s REAL Transport Vision

Residents of Melbourne’s inner suburbs have been fighting attempts to carve freeways and tollways through our city for decades.

In the 1970’s and 1990’s we defended the inner north against the F19 and Alexandra Parade widening.

In 2008 we began organising against East West Link Needs Assessment.

And in 2012 – 2014 we successfully fought the Napthine Government’s disastrous East West Link.

After that amazing success many thought we had finally stopped the politically-driven transport planning process in Victoria.

We were wrong. So very wrong.

Here we are again, facing a mega roads agenda with no vision for a sustainable and integrated transport system for Melbourne.

This time it’s west and north-east residents that are facing the onslaught.

Both the West Gate Tunnel project and the North East Link Option A will threaten the inner north and the city, adding traffic chaos and putting the East West Link back on the agenda for the future.

Both will destroy open spaces, amenities and people’s homes.

Our air quality will worsen.

Flyovers and elevated roads will blight the landscape.

We will all suffer from these roads. All of us will be impacted. 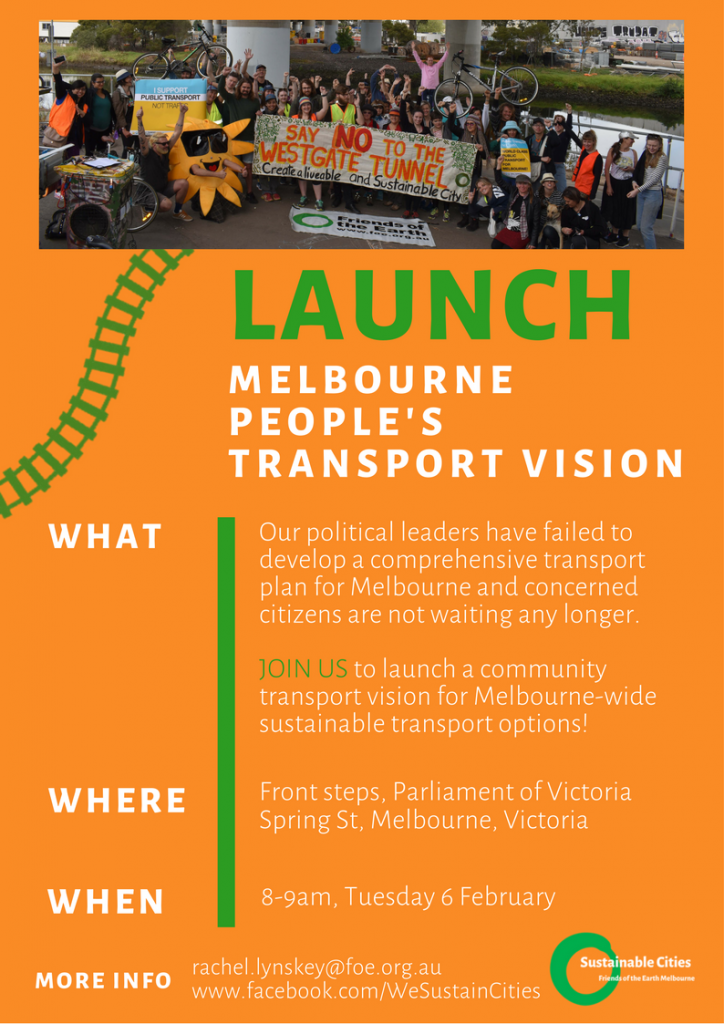 And if we let this happen, it will happen again and again, because we all know that building more roads means more cars, and then more roads, more destruction of our living spaces.

Its time to stand up and reclaim our right as citizens to have a say in how our city is planned.

Its time to say NO to planning being dictated by corporations like Transurban who are motivated by profiteering from toll debt.

We want a world class, clean, sustainable transport system. We invite you to join Public Transport Not Traffic, Sustainable Cities, Don’t Destroy Millers Road, Friends of the Earth, Public Transport Users Association and many others at the launch of Melbourne’s REAL Transport Vision, (alternative link) 8am – 9am, Tuesday 6th February, Parliament of Victoria, Spring Street, Melbourne